Hello and welcome back friend, to the Groundling’s Guide to Shakespeare. It’s been a few weeks since we last met. Sorry about that. My day job has been keeping me rather busy of late. As much as I would like to say blogging and guest lecturing is my livelihood, it is not. Someday! I do rather love my current day job though it does take me away from my passion now and then. As we move on and get into the heart of Shakespeare’s work I promise to post on a regular basis and let you know when there will be a gap as I travel out of town.

It is summer here in the States, and the temperatures are climbing for us in the west. If you are anything like me, this is a good time to stay indoor and read; ceiling fans and water at the ready. Now is a great time to talk about reading Shakespeare more specifically, how to read Shakespeare.

Being new but interested in Shakespeare you may have an introduction to Shakespeare book or two in your collection. If so, no doubt the advice given tells that the ideal way to immerse yourself is by attending a Shakespeare play. Some say this is the only way! Sound advice for sure if, A: Shakespeare plays are routinely running in your area, and B: the plays are performed by well-trained actors. There is nothing worse than seeing a performance of let’s say, A Midsummer’s Night Dream, acted by performers who rushed through the performance as if they were on stage because they lost a bet. Sadly this did happen to me one summer . You can find my review of it here. https://wp.me/p28tJt-nf

There are as many poor performances of Shakespeare as there are good ones. It would be a shame if a first time audience member were to be put-off due to bad acting. Better to recognize a bad performance than think this is how Shakespeare is supposed to be. You can only do this if you have some basic understanding of what you are about to see. This is when reading comes in handy.

The beauty of reading Shakespeare is that the experience allows time for you to go slow and savory the lines. Shakespeare wrote some of the best lines/thoughts in the English language. Reading them for the first time allows the reader to appreciate them for their beauty and composition. An example comes from Romeo and Juliet.

My bounty is as boundless as the sea, My love as deep. The more I give to thee,

The more I have, for both are infinite.

Beautiful, right? The first time I read these lines, I made notes and quickly memorized them. Now, imagine hearing these lines for the first time by an actor who whispers them is a rushed tone; as if they were disposable and unimportant. Yes, this happened once in a live production. Later I repeated the lines to my theater companion, and asked if she remembered hearing them. She had not. A couple of days later she found herself reading the play just to catch all of the beautiful lines that had been missed in the performance.

Reading Shakespeare can be a rich and rewarding experience if you know how to read the text. It is not, as a lot of goundlings assume, all that difficult a skill to master. Don’t let some of the archaic language stop you from this enjoyable hobby. Less than 10% of Shakespeare’s words are outdated. The meaning of many of his words may have changed but, set in context it is easy to understand his use of them.

The modern reader of Shakespeare has a variety of editions to pick from. I go back and forth between Folger’s and Arden editions. Each contains useful guides at the beginning of each scene that offers tips on some of the lesser known words and phrases. Despite what your high school English teacher tried to tell you, reading Shakespeare is not like trying to decipher a foreign language. But there are a few things you need to know before picking up that book. Here are some useful tips I learned from Professor Mark Williams in his class Painting on the Page.

Shakespeare wrote i several forms, though two are vital to our understanding. Prose is a theatrical reflection of our common language. When a character speaks in prose it is our cue to understand that he or she is not of the court. Though there are times when a seemingly “low born” uses poetry. This is seen as highly emotional speech and is used to convey intelligence beyond the character’s station.

Verse is poetry. Shakespeare arranges highborn characters’ speech patterns into poetry, or rhythmical lines. When we hear verse it is our cue to know that someone of importance or nobility is speaking. It is also why Shakespeare continues to enthrall audiences worldwide. His use of verse is unequaled in the theater.

The form of poetry that was popular in Shakespeare’s time was iambic pentameter. It is one of the forms of poetry that closely mimics English-speaking speech patterns. This form of rhyming consists of a line of ten syllables, made up of five strong beats (penta) and five weaker beats. The first syllable (beat) is weak, followed by the stronger syllable. It looks like this:

a HORSE a HORSE my King Dom for   A horse!

to BE or NOT to Be that IS the quesTION

The length of an iambic pentameter line can be said in one breath and follows in a heartbeat-like pattern of rhythm. Try it for yourself but try not to get carried away by the strong beat or you will end up sounding less like Kenneth Branagh and more like William Shatner.

Heightened speech (or verse) is often employed as blank verse. This is verse that does not rhyme but follows the syllable pattern of iambic pentameter. You can usually identify it by the use of a capital letter in each line.

The quality of mercy is not strain’d,
It droppeth as the gentle rain from heaven
Upon the place beneath. It is twice blest:
It blesseth him that gives and him that takes.
‘Tis mightiest in the mightiest, it becomes
The throned monarch better than his crown.
(The Merchant of Venice )

As you read Shakespeare you may wonder at some of the “misplaced” punctuation marks. Remember this; not all thoughts end in a line. All thoughts stop at a period, question mark, or exclamation mark. Often the written form of the line is to show which of the words actors are to pause on before continuing without breaking up a thought.

When reading Shakespeare you will notice that some lines begin halfway across the page like this from Macbeth:

This is form of pattern is known as shared lines. It refers to verse lines shared or split between two or more speakers, a frequent device for composing fast-paced dramatic dialogue. Think of it as the second person finishing the first’s sentence. The lines are shared as if they were one line.

That’s all. It’s that simple. This is all you really need to know to start your reading journey into Shakespeare’s world. Start with any of the plays you like. I always refer new readers to Julius Caesar.  The play is short and one that easy to follow. Midsummer’s Night Dream is a lot of fun. The play with-in the play should not be missed. Once read I do recommend seeing it live, or if that is not an option, rent Peter Hull’s 1968 version.

Above all, have fun with the texts. After all they are just “Words, words, words” (Hamlet). 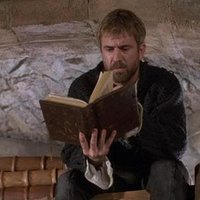 One Reply to “Words, words words! How to read Shakespeare”

Talk to me! Cancel reply