Happy Sunday. I hope after last week’s post inspired you to read a play. One of the many fun aspects of getting familiar with Shakespeare is learning how he has inspired modern culture. As you dive deeper into Shakespeare’s world you will find many surprising discoveries about your favorite moves and music. For instance, did you know Disney’s The Lion King is based on Shakespeare’s Hamlet? It’s true! Though thankfully for children, Disney rewrote the ending.

Not too long ago I decided to try listening to audio versions of Shakespeare’s plays. This is not my favorite way to enjoy Shakespeare, as it can be hard to follow who is who if unfamiliar with the play in general, but does allow one to think about different aspects of the play.

As I listened to A Winter’s Tale, one of Shakespeare’s last plays, written in 1609, I found myself thinking of another Disney movie and Shakespeare’s possible influence on it so I did some research. Learning about the history of story of Sleeping Beauty, I think we can agree, Disney made the right choice.

The origin story of the fairy-tale we know as Sleeping Beauty is the stuff of nightmares. This early modern horror-story account follows decades of older oral tradition. God only knows what people must have thought of the French troubadours who recounted this gruesome tale.

If you’ve never encountered Giambattista Basile’s 1634 story, Sun, Moon, and Talia, consider yourself lucky. His is  so far removed from the one we know today, it’s hardly surprising Basile’s name is lost to the ages.

In Basile’s story, the young sleeping princess is found not by a young prince, but by a married king who rapes the comatose girl and then returns home as if nothing out of ordinary had just happened. Unfortunately for the king, he is married to a heartless shrew and he begins to think about the girl who just lay there. In fact, the more he thinks about her, the more convinced he is in love with her. And the story only gets worse from there! Let’s consider what happens to the maiden when she awakens from her coma:

The young princess gives birth to twins one of whom suckles her finger causing the enchanted splinter to fall out, which in turns causes the princess to wake up and see that she inexplicably has two babies at her breast.

The king comes back, tells her what he has done, and promises to find a way to bring her to his castle, because for reasons that defy explanation, the two fall in love.

The story only gets worse from there! The queen finds out about the princess and her children. She is furious and demands to have the babies brought to her so that she can have them cooked and feed them to the king. The cook (the only decent person in the story) decides against cooking the children and instead tells the king of his wife’s plan. That is the end of the Queen. In the end the king, the princess, and children all live happily ever after.

Thankfully, by the time the Grimm brothers recounted the tale as “Brier-Rose” in 1812, all mention of rape and cannibalism was gone. Their story is one in which the young princess sleeps for “many long years” until a passing prince, upon hearing about the beautiful girl, decides to find her and behold her beauty for himself. He awakens her with a kiss and they live happily ever after.

Disney could have easily used the Grimm version of the tale, yet they chose to have their prince be the very person who would have married the princess had she not been cursed. As you may recall, the two were betrothed right after she was born. This version did not have the grieving parents die childless; rather, everyone lived happily ever after. But only after some very Winter Tale like mishaps.

In both tales, a young princess is brought up believing that she is a shepherdess.  In both tales a young prince falls in love with the shepherdess due of her beauty and singing voice. In both tales the two would have been wed (had mishaps not occurred) because their fathers were good friends. In both tales the prince is forbidden to see the shepherdess again, but because both end on happy notes, it is assumed both pairs marry. And to add more fuel to the speculation fire, Florizell (the prince in Shakespeare’s play) calls Perdita (the princess) “Flora”. “No shepherdess, but Flora peering in April’s front”. Act 4 scene 4. Flora is the name of one of the three fairies tasked with keeping Aurora (the Disney princess) safe. In case you forgot, they are: Flora, Fauna, and Merryweather. 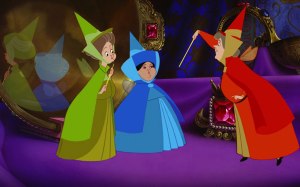 I recommend reading A Winter’s Tale for its fairy-tale like quality. If nothing else, read it because it contains the most often (or only quoted) stage direction in theater history; Exit, pursued by a bear.

When you discover references to culture by Shakespeare do let me know in the comment section below. It is always a treat to find Shakespeare’s influence in our modern world.